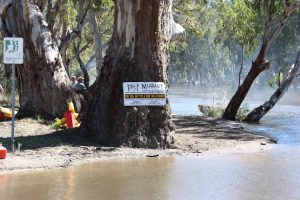 The 2012 edition of the Murrabit Cod Challenge was arguably one of the easiest ever for anglers – when it came to parkng their boats at least. Due to the high flow of the Murray River either side of the town bridge after recent floods in the east of the state and southern New South Wales, boat access was a simple as could be. Drivers and fishers alike just had to run the craft gently up the bank or the official ramp and step straight onto land.

Rowan McKerrow, Murrabit Football Club vice-president, said the entry list had been a good one, with more than 200 anglers hitting the water over two days of competition.

Competitors had clear, cloudless skies on the Sunday after the weather was slightly less kind on the first two days of the Challenge, Friday and Saturday.

More than 25 yellowbelly and a total of six Murray cod with a length of more than 60 centimetres were caught – a very good result in what appeared at times to be tricky conditions, according to Blues president Scott McNeil.

“The river wasn’t as bad as it looked,” he said.

“It looked fairly black but it was actually fairly clear. Obviously it was the highest we’ve seen it for a fishing competition, although last year was high too just after the floods. It was a worry initially – not optimum conditions for fishing, but it turned out well.”

Visitors came from Newcastle, Maryborough, Geelong and Ballarat, along with a strong local contingent.

As McKerrow pointed out, it’s not much of an event without home-grown support.

The fast-flowing river also caused a few nervous moments for some.

“Competitors had to be careful,” he said.

“There were a few logs floating down the river.”