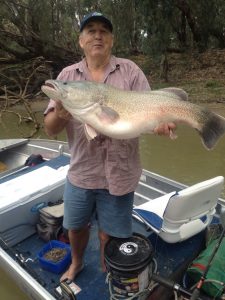 It was another successful weekend for the Murrabit Football Club, with the sixth annual Murrabit Cod Challenge held on Murray River at Murrabit during last Saturday and Sunday. Entries for the competition filled quickly, which were capped this year at 275. Competitors travelled from all over the state, with some as far away as the New South Wales mid coast, using various types of baits and lures to try and land the elusive Murray Cod.

With the river dropping over recent weeks, catching any type of fish was going to be difficult. However, competitors never gave up with numerous cod, yellow belly and the bothersome carp being among the variety of fish caught. The largest Murray Cod caught over the two-day event was captured by Ross Stanton. This 82.5-centimetre monster was caught early Saturday morning and was the envy of all as the remaining competitors attempted to catch a bigger fish. The largest Yellow Belly, a whopping 49 centimetres in length, was caught by Darren Hoskin of Stawell.

“I have been fishing in this competition for six years now, and have always enjoyed the fishing and the professional approach taken by the organisers of the event,” Peter Shay from Maryborough said. “This event sets a very high standard and the catering is second to none. It’s not all just about the fishing, but getting away for a few days with family and friends.” Event co-ordinator, Brent McKnight said that it was a great achievement for the organisers to sign up such a large number of competitors two weeks prior to the weekend.

The winner of the major prize, Chris Norton from Lake Boga, thanked the club for running such a great event and sponsors for providing the boat, motor and trailer package. Other major prize winners were Ossie Dixon of Whycheproof (portable fridge), Cameron Ellis from Brewster (electronic boat motor) and David Burt of Maiden Gully (three-man tent). The largest group of competitors went to Hook’Em Fishing, with 30 members taking home the $500 prize.

There were 22 additional juniors that participated this year with all taking home an assortment of prizes donated by numerous local businesses. The major junior winner was Murrabit boy Tyson Heffer who caught two legal size Yellow Belly.

Congratulations to Ross Stanton for catching a 82.5cm Murray Cod.  Ross took out the Murray Cod Challenge and the Longest Murray Cod prizes.  All round fishing was good with 5 legal sized Murray Cod caught and many undersized cod released.  Total legal Yellow Belly caught was 29.