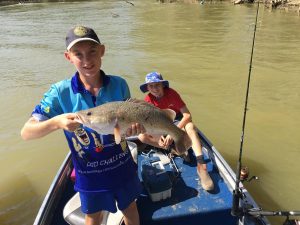 Marvellous weather set the scene for another successful weekend for the 11th annual Murrabit Cod Challenge held on the Murray River at Murrabit. Entries for the competition, which is capped at 300 competitors filled very quickly again this year. Competitors travelled from all over the state and NSW, with some as far away as Thurgoona and Geelong with all using various types of baits and lures to try and land the elusive Murray Cod. With the river at a lower level over recent weeks, catching any type of fish was going to be for those that persisted and took a skilled approach.

A total of 19 Murray Cod over 55cm were measured and 7 Yellow Belly over 30cm.

Each year there are a number of junior participants in the competition and it seems that they are by far superior when it comes to catching fish. Of the 41 juniors competing they caught a combined catch of 9 Murray Cod. The outstanding effort for the weekend was from young Alastair Semmler from Shelbourne who caught a total of 3 Murray Cod with a combined length of 208 cm.

The winner of the largest Murray Cod caught over the two-day event was captured by Alastair Semmler measuring a whopping 90 cm. The largest Yellow Belly, a massive 49 cm was caught by Chris Wagner from Strathfieldsaye.

“I have been fishing in this competition for nine years now and have always enjoyed the fishing and the professional approach taken by the organisers of the event. This event sets a very high standard and the catering is second to none. It’s not all just about the fishing but getting away for a few days with family and friends”, said Mick Woods from Eltham.

Event coordinator Brent McKnight said that it was a great achievement for the organisers to sign up such a large number of competitors in record time this year. We have had many enquires regarding next years competition already. “It just goes to prove how popular this competition has become”, said McKnight. 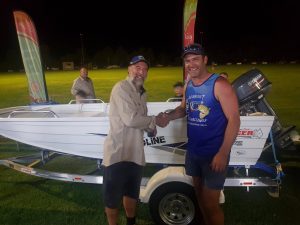 The winner of the major raffle prize, Neil Hopkins from Murrabit, thanked the Murrabit Football & Netball Clubs for running such a great event and sponsors Molins Motorcycle & Marine for providing the boat, motor & trailer package. Other major raffle prize winners were Adam Beardon of Epsom winning the Engel portable fridge donated by Engel & BlueSky Swan Hill. The electric boat motor donated by Murrabit Trading was won by Peter Bergman of Heathcote and the Early Bird prize of a fishing rod & reel donated by BlueSky Swan Hill went to Dan Keath of Koondrook. The largest group of competitors again went again to Hookem Fishing with 27 members taking home the $500 prize, closely followed by N.F.H fishing with 23 members. All 41 junior participants took home an assortment of prizes donated by numerous local businesses.

Alister Semmler was no doubt the champion fisherman for the weekend catching a 61cm, 90cm & 57cm Murray Cod, taking out both the Murray Cod Challenge & Longest Murray Cod.

The Yellowbelly Challenge when to Jordan Eldesten & James Bannam with 635 points.  Chris Wagner got the Longest Yellowbelly.

Although fishing for the adults this year was a bit quite, the junior competitors had no problems catching any fish.  We had 41 junior competitors this year breaking the record, with a total of 8 Murrray Cod caught by junior competitors, Alister Semmler 61cm, 90cm, 57cm, Jackson Fletcher 66cm, Jordan McNeil 65.5cm, Macey Holmes 57cm, Harry Semmler 55cm, Noah Shea 55cm and Cooper Meehan 47cm.