Glorious weather set the atmosphere for another successful weekend for the Murrabit Football & Netball Club as the 7th annual Murrabit Cod Challenge was held on the Murray River at Murrabit. Entries for the competition filled quickly this year which is capped at 300 entrants, an increase of 25 on last year’s event. Competitors travelled from all over the state, with some as far away as the NSW mid coast, using various types of baits and lures to try and land the elusive Murray Cod. With the river dropping over recent weeks, catching any type of fish was going to be difficult. However, competitors never gave up with numerous cod, yellow belly and the troublesome carp being among the variety of fish caught.

“Awesome weekend was a shame it ended so soon. Will definitely be back next year” Louise Dowdy of Amphitheatre VIC.

Event coordinator Brent McKnight said that it was a great achievement for the Murrabit Football & Netball club to fill the event with 300 adults and 22 juniors. Our event is becoming known for its fantastic meals and home grown country hospitality.

The winner of the major prize, Wayne Dettman from Sorrento, thanked the Murrabit Football Netball Club for running such a great event and sponsors Molins Motorcycle & Marine for providing the boat, motor & trailer package. The second major prize winner was Dave Semmler of Murrabit winning the Engel portable fridge donated by Engel & Blue Sky Swan Hill. The Third major prize the electric boat motor donated by Murrabit Trading was won by Jack Kelly of Barham. The Early Bird prize of a swag donated by BlueSky Swan Hill went to Darrell Phillips of Echuca. The largest group of competitors went to Hookem Fishing with 20 members taking home the $500 prize. The Hunter Marine junior fishing section was won by Toby Lambert of Cohuna who caught a 35cm Yellow Belly. All of the 22 juniors that participated this year went home with an assortment of prizes kindly donated by Hunter Marine and numerous local businesses. 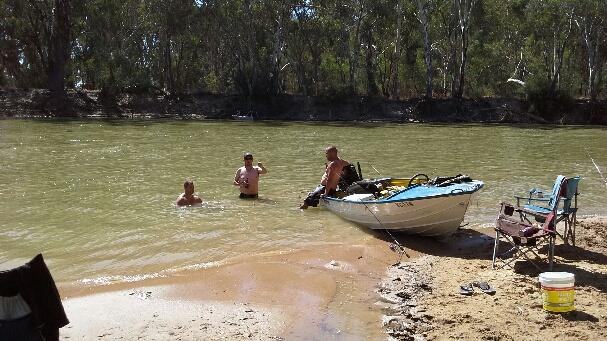