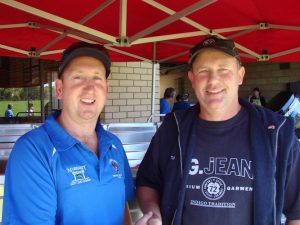 The 2011 Murrabit Cod Challenge was held on the Murray River at Murrabit recently with fine weather making it an enjoyable event for all. More than 200 competitors travelled from all over the state and used many different types of baits and lures to try and land the elusive Murray Cod. With the river being high due to recent flooding, catching any type of fish was going to be difficult. However, competitors never gave up with numerous cod, yellow belly and the pesky carp being among the different assortment of fish caught.

“I have been coming up here for three years now, and have always enjoyed the fishing and professionalism of the event. It’s not all just about the fishing, but getting away for a few days with family and friends”, said Greg Solomano from Bendigo

Event coordinator Brent McKnight said that it was a great achievement for the organisers to sign up over 200 competitors as we have had some difficult times over the past few months with the floods, river closure and also clashing with duck opening. “We will have to contact DSE regarding duck opening next year before we confirm our date”, he said.

The winner of the major prize, Peter Parker from Murrabit, thanked the Murrabit Football Netball Club for running such a great event and sponsors Molins Motorcycle & Marine for providing the boat, motor & trailer package. Other major prize winners were Ricky Maher winning the Engel portable fridge donated by Lightbody’s Retravision. The Gentech generator donated by Murrabit Trading was won by Mick Daykin of Bendigo, and young Mick Hearps also from Bendigo won the early bird prize of an electric motor donated by Blue Sky. There were 15 juniors that participated this year with all taking home an assortment of prizes donated by Hunter Marine. Planning for the 2012 event has already begun with some possible changes in the pipeline.

This event would not be possible without the support of our generous sponsors Molins Motorcycle & Marine, Lightbody’s Retravision, Murrabit Trading, Blue Sky, The Northern Times, Hunter Marine, Gannawarra and Wakool Shires and Jerilderie Motorcycles & Marine.